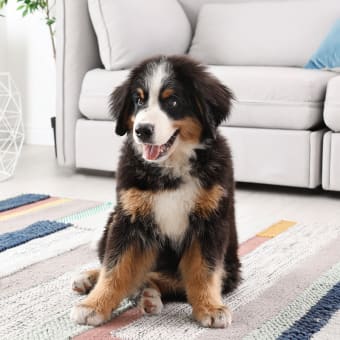 Cerebellar hypoplasia and cerebellar abiotrophy (degeneration) are serious conditions that can effect the cerebellum region of your dog's brain and lead to a loss of coordination and balance. Today our veterinary neurologist explains more about these neurological diseases in dogs.

What is cerebellar ataxia in dogs?

Any condition that damages the cerebellum can produce symptoms of ataxia (loss of full control of voluntary body movements). Whenever a dog shows signs of cerebellar ataxia diagnostic testing is recommended in order to rule out other possible causes of the symptoms such as brain tumors, infections, or congenital malformations. Diagnostic testing is key since many of the conditions which can lead to ataxia are readily treatable.

How is cerebellar ataxia in dogs diagnosed?

Primarily vets rely on a complete review of clinical signs combined with a knowledge of the breed, to deliver a diagnosis of suspected cerebellar ataxia.

Diagnostic testing to help confirm the diagnosis involves a variety of tests to rule out other diseases. Such tests can include cerebrospinal fluid (CSF) analysis, complete blood cell analysis, blood biochemistry, thyroid testing, urinalysis, brainstem auditory-evoked response, and CT or MRI scans of the brain.

While the symptoms of cerebellar hypoplasia and cerebellar abiotrophy are much the same there are a couple of important differences between these two conditions, and the outcomes in some cases can also be very different. Common symptoms of these conditions include: abnormal gait, broad-based stance, head tilt, lack of coordination when walking, and swaying.

Cerebellar hypoplasia in dogs is a condition characterized by the inadequate development of the cerebellum. Since the cerebellum is responsible for fine-tuning motor movements, affected pets will be unable to move or even stand still normally.

What is the prognosis for dogs with cerebellar hypoplasia?

How is cerebellar hypoplasia treated in dogs?

Unlike cerebellar hypoplasia, cerebellar abiotrophy in dogs is most often an inherited degenerative disease which attacks the cells within the cerebellum, causing the cells to gradually die off. This conditions leads to a loss of balance, posture and coordination which typically become more severe over time.

Cerebellar abiotrophy tends to be a breed specific disease with symptoms appearing in different breeds at different times, and showing different rates of progression from one breed to another.

There are 3 types of cerebellar degeneration seen in dogs:

How does cerebellar degeneration progress?